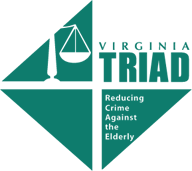 According to the 2000 Census, one out of every seven Americans is a senior citizen. While those aged 60 and over make up 15 percent of the national population, a full 30 percent of all cases of fraud are committed against them. That's twice the normal rate.

The population of Virginians age 60 and over will grow from 14.7 percent of the total population in 1990 to almost 25 percent by 2025 when there will be more than 2 million Virginians in this age group.  (Virginia Department for the Aging)

The number of Virginians age 85 and older will increase dramatically between 1990 and 2025 – five times faster than the state’s total population growth. (Virginia Department for the Aging)

Virginia's older population is growing more racially and ethnically diverse, reflecting the growing racial and cultural diversity of the Commonwealth and the nation. (Virginia Department for the Aging)

A single senior victimization can frighten a community of seniors.  They abandon patterns of visiting friends, going to worship, shopping, and other social interaction.  The United States Department of Justice states that among victims of non-lethal violence, persons 65 or older were about 6 times more likely than younger persons to never go out at night.

Most studies and polls on the concerns of older people reveal that the fear of crime ranks as their first or second cause of worry. This concern can be healthy if it leads to positive steps to avoid being victimized. At the same time, unjustified fear can become a very negative influence that mars one's enjoyment of life. We see this negative influence when older people avoid leaving their homes even for a quick trip to the mailbox or refusing to participate in community activities for fear of being attacked.

Combating Misconceptions About the Incidence of Violent Crime

Older people typically suffer the least victimization but express the highest level of fear. However, the elderly are sometimes at increased risk of victimization because: